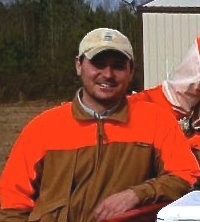 Cal Trout grew up primarily hunting ducks and doves in the area’s rich wing-shooting and waterfowl tradition. Mississippi’s Tallahatchie County hosts some of the best waterfowling opportunities in the country. Trout along with his brother, Daniel and their father, Bud spent most of their autumns hunting doves. Their winters were spent chasing ducks. Growing up, they always had and trained Labrador Retrievers. When Trout went to college at Ole Miss, the state’s flagship university, many winter weekends would find him back in the area hunting ducks on his father’s lease at the world famous York Woods before the property sold.

While earning a degree in history and an MA in journalism, Trout decided to remain in the area he had always called home in lieu of chasing a career in publishing in an urban area elsewhere. One afternoon in 2007 his good friend, Nat Martin, came down from Tennessee and took him quail hunting with his Brittany, Scarlet. Trout was hooked after seeing the dog work a field out to its edge before slamming onto point. By the time the bird flushed and was dropped he knew this was something he wanted to do from now on.

Posted in Bio And History